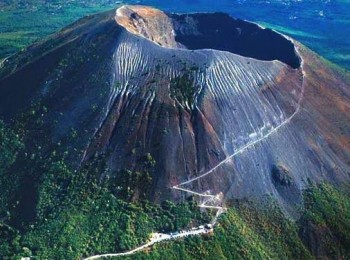 Travel from Sorrento area, along the scenic route of the Sorrentine Peninsula learning something special about the Sleeping Giant well known in the world!

With your Driver you will gradually climb up through the original crater to approx 3.000 feet , your transport takes you a little farther up the Volcano and as far as the vehicle can go.

Once reached this point you have the opportunity to hop off and walk the rest of the way to the Crater . On your return to Sorrento you will have a chance to stop and take lovely photos of the breathtaking view.

Opportunity to experience what life was like in Roman times
Explore the main features of the ancient city, the baths, bakeries, Arena and Brothel, just to name a few.

Departure in the morning from your Hotel along the scenic route out of the Sorrentine peninsula, the journey from Sorrento to the ruins is approx. 45 minutes.

On arrival at the entrance to the site don’t forget to buy your entrance fees!

Visit of the Unesco World Heritage site last about 2 hours

Left behind Sorrento and after stopping along the way to admire the view and take pictures of the superb panorama of the Coast you’ll make your first stop, of about 2 hours, in Positano, one of most enchanting and romantic places in the world, and a famous tourist destination since Roman times. Positano has all the typical characteristics of the towns of the Amalfi Coast: the historic center being located in the higher part of the town, linked to the harbor and the beaches by an infinite series of steps and steep winding roads.
It’s main beaches ,accessible by foot, are Spiaggia Grande and Fornillo.
During the middle ages numerous watch towers were built in the area so as to guard against attack by the Saracens, frequent perpetrators of violent assaults on the coastal populations. One such tower can be found just outside the town of Positano, in Punta Campanella.

Nineteen kilometers from Positano lie Praiano, it may be less famous than its once omnipotent neighbor but Praiano is just as beautiful. Your journey continues crossing many little white houses leading from Praiano to Furore and Conca dei Marini.

Furore , dates back to 1752, is situated on extremely impervious terrain, is known for its cuisine which uses the local tomatoes, olive oil, potatoes and mountain herbs to great effect.
Just beyond Furore, you’ll pass trough Conca dei Marini, a fishing village known above all for the Smeraldo Grotto, a karst cave the waters of which are tinged with a spectacular emerald hue.
The cave offers an impressive display of stalactites and stalagmites which, in certain places join so as to form columns as many as ten meters high. The Grotta can be reached by boat or with a lift taken directly from the main road.

After few kilometers we come to the historic town of Amalfi which, in 1997, was awarded the status of World Heritage Site by Unesco.
Undisputed ruler of the seas in the 12th century, the town’s gradual decline from power has in no way diminished the beauty of its historic monuments, monuments such as the Cathedral of St. Andrew: a gothic masterpiece complete with highly decorative façade and impressive flight of steps.
The immense cathedral doors, made in bronze, were realized in Constantinople in 1065. Whilst wandering through the picturesque lanes of Amalfi, lined with tiny white cottages and shops, it is easy to catch a scent of the “sfusato” lemons which grow in abundance on this stretch of coast and are used to make the area’s highly prized limoncello liquor.

Here your driver will stop for about 2 hours where you will have the possibility to do dome shop or have a lunch in a local Restaurant with price much more affordable than in Positano.
From Amalfi you’ll take the provincial highway which leads to Ravello, town built above those of Maiori and Minori, on a high plain of the Dragon Valley.
Breathtaking views of the Gulf of Salerno can be admired from the terraces of the elegant villas such as , Villa Cimbrone, Villa Rufolo , for which the town is famous, villas once chosen as preferred residence of many a famous personage, from J. F .Kennedy to Roberto Rossellini, from Federico Fellini to Winston Churchill.

Lunch on your own

You’ll visit the Monte Cassino Abbey first after a 2 hours ride from Sorrento. The second part of your tour could be spent in a nearby  museum, learning about the conflict that took place here.

You’ll also get to see the Commonwealth Cemetery – a haunting site that sits in the shadow of the abbey. It’s the resting place of the soldiers that fell during the battle.

Lunch on your own

Return in Sorrento in the late afternoon

The Royal Palace of Caserta 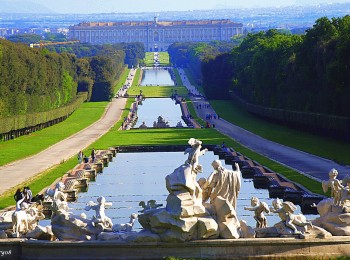 This tour will give the unique opportunity to visit the famous Royal Palace of Caserta traveling in a very comfortable way! Pick up in the morning and drive to Caserta where you will reach the Palace in about 2 hours , free time to visit its fascinating Gardens, Monuments and charming room.

Lunch on your own.

Return to Sorrento in the afternoon

Fall in love with Naples

This tour will lead you by Piazza del Plebiscito, from there you can start your own Walking tour to the San Carlo Opera, admire the Royal Palace and the well known Galleria Umberto I.