Stories and legends of Massa Lubrense: The Vervece 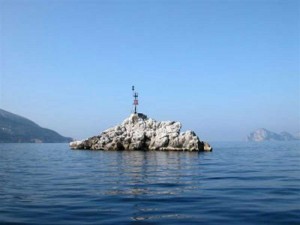 Opposite Marina Lobra rises from waters “O’Revece” or the Vervece (from the Latin Vervex = goat) a typical Massa rock. However small it is to see, the ‘island of Vervece is rich in stories and legends…

Legend tells that the women of Marina della Lobra, a fishing village from which you can admire the rock, to protect their homes from storms , they decided to pull ashore the Vervece. They prepared the huge ropes and put themselves on the beach women, old and girls. A time ignoring the attempts of men to make them desist, but women “tenevn a’capa tosta” (they were stubborn, with hard head). They began to pull and pull, but the giant did not move a step. And they pulled … and pulled, until … the strings were broken and the women ended up upside down, knocking the buttocks on the ground. Since that day, it is said that all the Lobra’s woman have sit flat.

The Vervece also enters into another story, of which the protagonists are two Painters: Carlo Amalfi, a native of Sorrento, a pupil of Sebastiano Conca called the Gaetano, and his false friend , Louis Blower.

As was good, loyal and generous Carlo, he was so envious, false, evil Luigi. This latter, after having combined all the colors to the poor Carlo even came to him imprisoned for a year making use of his friendships to Court.During his enforced stay Carlo was able to realize the wickedness of false friend and meditated revenge. After serving his sentence, he returned to Sorrento and when he met Louis, who showed himself obviously unhappy misfortunes of others and absolutely foreign to the fact, he made the best of a bad job, waiting for the right moment to punish him. And the right day came! Carlo, able seaman, invited Luigi, who could not even swim, to take a ride on a sailboat, having noticed that he was to approach a gale. They made the move towards Massa and when they arrived in the vicinity of Vervece were in full storm. Carlo liked to maneuver in the waves, while Luigi was in tears and begged his friend do land somewhere. Request was immediately welcomed by Carlo who approached the Vervece, made him climb the rock and then left, shouting him that it was now time to reflect on all bad things done. Carlo had intended only to scare Luigi, and then was startled, when, went to Vervece the morning after to retrieve it, he was not there, nor will he heard in any Marina of the Peninsula. The “Amalfi “spent the rest of his life with the guilt of having caused the death of Luigi. While in Nocera to perform the work, he felt that his time was coming, and he sent a monk from the nearby Capuchin monastery. So it was that after confessing his alleged crime, which had tormented for so many years, he was surprised to discover that the monk was just Luigi Blower. He had been picked up by a boat of Procida and obviously the lesson had been enough, so he decided since then to spend the rest of his days in a Convent to atone for his sins. And then Carlo Amalfi could die happy and relieved from the torment that had plagued him until then.

The Vervece, is located less than a mile from the port of Marina della Lobra, and with its lighthouse is now automated, diligent watch over fishing village and all sailors. Once again, however, as all headlights, he was entrusted to the care of a person. First “guardian” was Salvatore Catuogno, The commission then passed into the hands of Liberato Mollo and from there to Matthew, his son. During half a century he took care of Vervece with a dedication that extending to him numerous honors, among which the appointment of the Republic Knight.

The year is 1903, when the fate of the rock is tied hand in glove with that of Madonna della Lobra. With the presence of a few witnesses, it was erected a cross which consecrates the Vervece a real natural sanctuary. In 1974 then , about 12 meters deep , was placed a bronze statue of the Madonna, to celebrate Enzo Majorca apnea record, which near the Vervece, reached the 87 meters deep. Since then, this rock is also an underwater sanctuary! The divers each year, on the occasion of the feast of the Madonnina del Vervece, (considered heavenly patroness of the divers and those who work at sea) dive to celebrate it and to lay flowers at the foot of the statue.

Vervece islets offers several attractive opportunities for scuba diving.To be able to do, however, you require a special authorization.

The Vervece is located in the maximum security area of the Marine Park of Punta Campanella and, to be able to reach it with a boat , (as well as diving facilities) a special Entity set up an authorization to ensure the protection and respect of the Marina Reserve. The particular shape of the seabed allows various types of underwater exploration. The less demanding – recommended for less experienced – expected to reach a depth of about 19 meters. Most experts, however, can evaluate various opportunities that reach up to 40 meters. .The Possible solutions, in each case, are varied, all able to procure indescribable emotions.