Ex Cathedral of Our Lady of Grace in Massa Lubrense

The Ex-Cathedral of Our Lady Of Grace is for sure something to visit during your stay in our paradise: Massa Lubrense; specially if you are thinking of getting married in Sorrentine Peninsula.
At our agency you can book wedding cars, transfers and excursions to Capri, Amalfi Coast, Pompeii and much other for you and your friends.
Besides from us you can have maps and information about our territory. 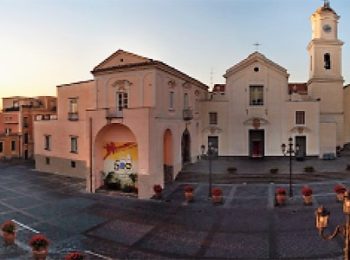 The interior is divided into three naves, connected to each other through five pairs of arches, which form four chapels on each side aisle, with two more on the sides of the high altar. It is worth mentioning the Chapel of the Baptistery, which is found on the left upon entering the church, where there is a panel depicting the Baptism of Jesus by Girolamo Imperato. It is also worth nothing, for their particular beauty, the frescoes of the tympanum depicting the Madonna of Grace and Child in ulnis by Marco Tardisco, dated the first half of the sixteenth century.

In the upper part, the Resurrection and Annunciation are depicted, while in the lower part, there are the Apostles. In the left transept, there is a Madonna by the artist Pietro Negroni. Mosto fo the tiled floor is a copy of the one laid in 1780 by Ognazio Chiajese. Some original parts, can be found in the area of the cancel and the chapels of San Cataldo and St. Joseph, on the two sides of the altar. In the bell tower, there are three bells dating back to the founding of the Church and engraved with the coat of arms of Bishop Bellotti.

On the left of the former cathedral, there is the bishop’s palace, already present in 1477 and residence of the bishops of Massa Lubrense

Sourches: Secrets and Wonders of the Sorrento Coast
by Roberto Pellecchia