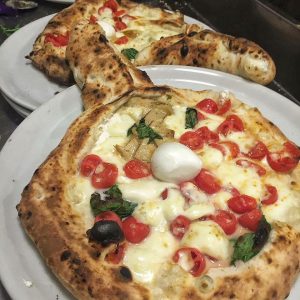 Its history is long, complex and uncertain. The first written records of the word “pizza” dates back to the vulgar Latin of Gaeta in 997, then in the sixteenth century, this name was given to a flat bread produced in Naples.

Before the seventeenth century, the pizza was covered with a white sauce, which was later replaced with olive oil, cheese, tomatoes or fish; and then in 1734 came the marinara pizza.

In June 1889, to honor the Italian Queen Margherita of Savoy, the chef Raffaele Esposito prepared the “Pizza Margherita”, a pizza topped with tomatoes, mozzarella and basil to represent the colors of the Italian flag. Although already in 1830, a certain “Riccio” in the book “Naples Contorni e Dintorni”, had written about a pizza with tomato, mozzarella and basil. Until the beginning of the 900 pizza and pizzerias remain purely a Neapolitan phenomenon; in northern Italy it began to waft after World War I; and in the late nineteenth century, with the arrival of immigrants, he made its appearance in the United States. It was in the city with the largest number of Italians, like San Francisco, Chicago, New York and Philadelphia that the pizza began to diffuse.

In the late nineteenth century in Chicago, for example, the pizza was introduced by a peddler who walked up and down Taylor Street with a washtub of pizzas on his head. This was the traditional way in which it was selling the pizza in Naples, in copper cylinders with handles on the sides and a lid on to keep the pizzas warm. It was not long before the little cafes and grocery stores would start to serve the pizzas to their Italian-American community.

Today, the turnover linked to the pizza (pizza, home delivery, frozen foods, fast food chains) is very relevant in the world, to the point that some clever entrepreneurs have built around the pizza great fortunes.