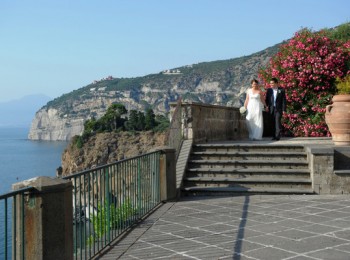 Built in 1840 in neo-classical style by the Prince of Fondi, Don Giovanni Andrea De Sangro, the villa is surrounded by a large park, full of olive trees, varius species of palms and numerous cacti. The outer side of this large garden offers a long and panoramic view over Marina di Cassano and the Gulf of Naples below, which is especially delightful in the evening.

Inside the villa, today a multipurpose facility, there is the Regional Museum of Archaeology of Sorrento Peninsula “Georges Vallet“, named after the French archaeologist, who from 1948 studied Greek culture in the West. Opened in 1999, today it’s the largest Archaeological Museum of the Sorrento Peninsula, housing a collection of documents and results of the most recent excavations, which reconstruct the settlement and transformation phases of the area from prehistoric times to the Roman Period. The museum is divided into several rooms, over two floors.

The first room on the ground floor, illustrates the prehistoric phase, with the first settlements and caves.

The second room is almost entirely devoted to the excavations carried out in the town of Piano di Sorrento, in the Trinity neighbourhood, relating to a settlement of the culture of Gaudo (II millenium B.C.).

In the entrance leading to the first floor, there are some examples of sculpture and architecture, including an archaic Marble head from Massa Lubrense and tufa Doric capitals found in Vico Equense.

Room 3, upstairs, is home to the archaic and classical necropolis of Massa Lubrense, Vico Equense and Sorrento, with Several tombs related to them.

The second room of the first floor is dedicated to the founding of the city of Surrentum and contains artefacts form the ancient city and its necropolis. Anthropomorphic memorial stones, glass and pottery balsam as well as interesting red-figured vases dating from the fourth century B.C. are on display.

In the same room, there is also a secion devoted to maritime villas with Marble reliefs and capitals from the villas in Capo di Massa in the Villazzano neighbourhood, and the model of the so-called Villa di Pollio Felice. On the ground floor, there is a colossal Marble statue of a female figure, found in Sorrento in 1971.

In the park, a beautiful nymph mosaic from a seaside Villa of the Julio-Claudian period (50-55 A.D.), found in Marina Lobra, has been reconstructed. It’s one of the most representative examples of the genre and the best preserved in Campania. Both the scenography of the structure as wel as the mosaic depicting a flower garden populated by birds, a topic widely used in the painting og the third Pompeian style, are grandiose.

Source: Secrets and Wonders of the Sorrento Coast by Roberto Pelecchia