One of the hamlets of Massa Lubrense, our paradise. From here you have an enchanting view to the island of Capri. At Annunziata there are also some beautiful location for wedding; so if you are thinking of getting married in Sorrentine Peninsula, don’t forget to insert in the list of places to see also Massa Lubrense.
At our agency you can book wedding cars, transfers and excursions to Capri, Amalfi Coast, Pompeii and much other for you and your friends. 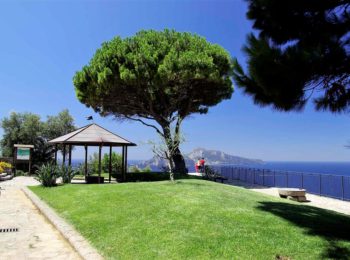 The town has very ancient origins, already mentioned in the acts of the first half of the tenth century with the name of Massa Pubblica. Given its highly strategic hilltop location, a castle was built there, which was destroyed bu Ferrante of Aragon at the end of the conlfict between the Angevins and Aragonese.

In the following century, the hamlet rose again with the name of Annunziata and, between 1565 and 1597, the castle was rebuilt, with it becoming strategic after the bloody attack of the Turks in 1558.

The village can be easly recognized from afar due to the presence of the seventeenth-century Torre dei Turbolo on the edge of the small village.

Upon entering the small village, on the right, at the top of a set of steps, there is the Church of the Annunciation, which was a cathedral until 1465, when the Bishop,s home was moved to the Church of Santa Maria delle Grazie in the center of Massa Lubrense. the current shape of the building dates from the early eighteenth century, when it was decorated with baroque stuccos. Inside, it is possivle to admire a sixteenth century painting of Our Lady of Mercy and a statue of the Dormition of Mary, which is very similar to the one kept in the Church of SS. Annunziata in Sorrento.

The most important histoic building of Annunziata is without doubt the Aragonese Castle, with only a cylindrical tower and the ramparts remaining. It can be entered by going around the Church and then up a short set of steps. The view from the top is one of the most beautiful views of the Sorrento Peninsula. At a glance, it is possibleto admire the Gulf of Naples, the Hills of Deserto, Le Tore, Massa Lubrense vcnter as well as Marina Lobra, and finally he island of Capri, which seems to be within a hand’s reach,

Returning to the houses of the Annunciation, for the most part dating back to the fifteenth and sixteenth centuries, there is the impressive building of the Conservatory Ave Gratia Plena, built in 1582. Futher down the road, just after the lookout, there is the seventeenth-century Villa Rossi (called Villa Murat from the local people), from where Joachim Murat-Jordy in 1808 directed the military operations for the recapture of Capri. It was a hard task that gave him great international prestige, enhanced by fact thatthe attemps of the previous ruler, Joseph Bonaparte, borther of Napoleon, had failed.

Sourches: Secrets and Wonders of the Sorrento Coast
by Roberto Pellecchia

This website or its third party tools use cookies, which are necessary to its functioning and required to achieve the purposes illustrated in the cookie policy. If you want to know more or withdraw your consent to all or some of the cookies, please refer to the cookie policy. By closing this banner, scrolling this page, clicking a link or continuing to browse otherwise, you agree to the use of cookies.Ok, I understandCookie Policy