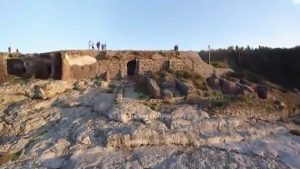 The territory of Sorrento includes Capo di Sorrento, where there the “Bagni della Regina Giovanna” and the remains of a Roman Villa, that for a long time were erroneously identified with those of the villa of Pollio Felice, a member of a wealthy family from Pozzuoli.

Apart from the archaeological importance, the place is charming, since the villa was built around a small bay that is completely surrounded by rock, with the sea entering through a natural opening.

The name “Bagni della Regina Giovanna” dates back to the popular tradition according to which Giovanna II of Durazzo ( 1373-1435) Queen of Naples, would entertain her lovers here in the waters of the beautiful natural swimming pool.

Upon reaching the ruins of the villa, follow the path to the left along the rock wal surrounding the small bay, with it being easy to see, since the vegetation is sparse. Continue walking for a few metres, until reaching the best preserved structures of the complex.

The remains of which still bear witness to the grandeur of the work relates in large part to what was the domus maritima, namely the residence by the sea, with the natural bay enclosed within the housing structure. The villa is divided into domus and villa on the sea, covering almost thirty thousand square metres.

The domus itself has almost entirely disappeared, while there are still sufficient ruins of the villa by the sea to be able to ideally reconstruct it. The garden was developed with a series according to the criteria that are still being used today in the Sorrento peninsula . It was closed off at the end by a beautiful exedra. It was possible to get to the vila either by land, crossing the narrow street, which is still the only way to reach the site, or by sea from the bay around which the house was built. The architectural system of the entire complex took advantafe of the beauty of the landscape with several structural devices, such as divergent walls and large Windows. Every detail was aimed at optimal comfort. Even the shaded areas, consisting of hanging gardens and pergolas, reflect the desire for well-being.

Source ” Secret and Wonders of the Sorrento Coast” by Roberto Pellecchia