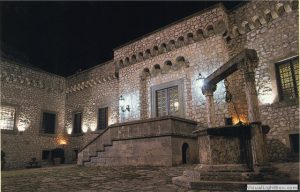 Built from the Duke of Sorrento, it was restored by Federico II and then rebuilt by an Anjou during the War of the Vespers. Reconstructed by Alfonso of Aragon and still working in the Spanish era, it began to decline in the eighteenth century finaly falling into ruin.

In the 1930s, it was purchased by private investors, who use it for public and private events. Only the outside can be visited.

This fort plays an extremely important role in the history of the city, with it giving its name to Castellammare di Stabia. In fact, its walls originated from the central complex going down the hillside, and ending with a lookout tower: at this point, the sea met the castle and hence the name of the Castle in the sea (Castello a mare)

Source Secrets and Wonders of the Sorrento Coast by Roberto Pellecchia 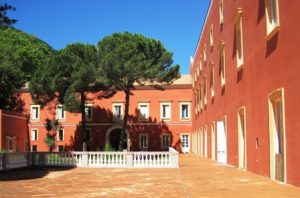 It was named  Domus de loco sano due to the healthy climate.

The first construction works were carried out during the Angevin period. It was the summer resort preferred by royalty, especially during the palgue in Naples.

In 1541, the imposing palae became the property of the Farnese family, even though its heyday came later, during the reign of Ferdinand II of Bourbon, who set out the villa accordin to an Anglo-Saxon plan. In 1878, the buildin was sold to the town of Castellammare di Stabia. After a period of being closed, it was reopened in 1923 under the name of “Royal Hotel Quisisana” until mid-1960.

The current structure of the Palace consists of three buildings that form a unique architectural structure. In the inner courtyard of the Palace, the garden still maintains the ” Italian garden” layout, but infortunately it has been neglected.

Source Secrets and Wonders of the Sorrento Coast by Roberto Pellecchia